By clicking Submit you verify that you are 21 years of age or older and agree to our cookie policy. 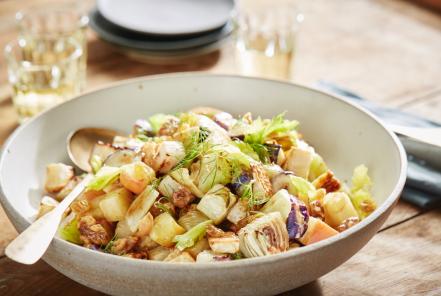 3 cups cored and diced Fuji or other red apple, cut into medium dice

To toast the walnuts: Preheat the oven to 325°F convection (350°F conventional). Put the walnuts in the center of a small sheet pan, drizzle with 1 tablespoon olive oil, sprinkle with 1/2 teaspoon salt, and toss to coat evenly, then spread the walnuts in a single layer. Toast for 6 to 8 minutes, until golden. Pour onto a cutting board to cool, then chop.

To roast the vegetables: Position two racks in the upper part of the oven and raise the oven temperature to 400°F convection (425°F conventional). Place two half sheet pans on the racks to preheat.

In a large bowl, combine the celery root, kohlrabi, and fennel with 3 tablespoons olive oil and 1 teaspoon salt and toss to coat evenly. Divide the mixture between the hot pans, spreading it evenly, and roast for 15 minutes.

In a medium bowl, combine the apple with 1 teaspoon oil and 1/4 teaspoon salt and toss to coat evenly. Remove the pans from the oven and raise the oven temperature to 425°F convection (450°F conventional). Add the apple to the pans, stir to combine with the vegetables, and return the pans to the oven. Roast for 8 minutes longer, until the vegetables and apple are tender and the edges are beginning to caramelize. Remove from the oven and let cool.

To make the vinaigrette: In a small bowl, whisk together the miso, mayonnaise, lemon juice, tahini, and apple juice, mixing well. You will not need all of the vinaigrette. The leftover vinaigrette will keep in an airtight container in the refrigerator for up to 3 days.

To finish and serve: In a small pot, bring the verjus just to a boil over high heat. Remove from the heat, add the raisins, and let sit for 5 minutes. Drain the raisins.

Toss the vegetable mixture with 3/4 cup of the vinaigrette, the walnuts, and the raisins. Garnish with the celery leaves and fennel fronds. Serve at room temperature.

Wine Club discounts will be applied at checkout